Even before the results were announced, the exit polls had clearly indicated that Narendra Modi led BJP government is again coming to the power for a consecutive second time in a row.

For a long time, people of India have been waiting for their verdict that was finally announced yesterday. As it was already being predicted, BJP emerged as the single largest party winning over 300 seats in the Lok Sabha general elections in 2019.

After the results were announced yesterday, most eminent people from different communities and background started congratulating Prime Minister Narendra Modi on his emphatic victory.

After the results were announced, it clearly indicated that BJP swept away most of the seats that the party had projected earlier.

After the exit polls results were declared on May 19, 2019, it was being speculated that BJP is going to win the Lok Sabha polls with a clear majority.

Now, as the results are already announced, it clearly reflects the emphatic win of BJP after winning as many as 303 seats.

Coming back to the entertainment industry, Bollywood stars not only campaigned for different parties in the polls but also chose to take part in the elections with full aggression. In fact, there is an entire list of cine stars who took part in the 2019 Lok Sabha elections. 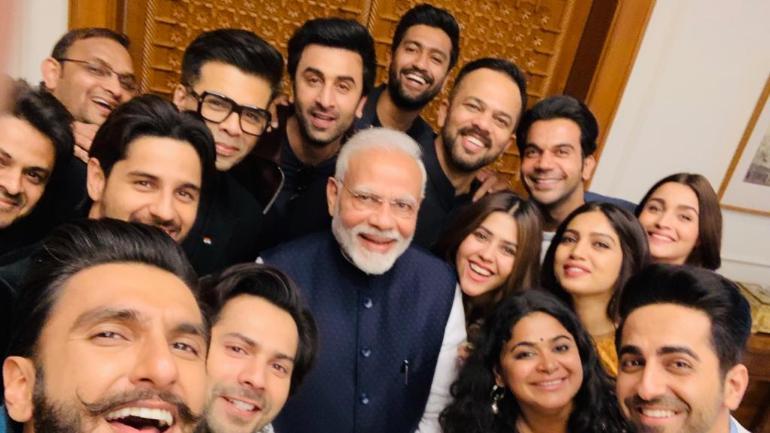 Salman Khan was also among others who congratulated him with a message saying that each one of them stand by him in building a stronger India.

Many congratulations Hon. Prime Minister @narendramodi on your decisive victory. We stand by you in building a stronger India.

Bollywood superstar Varun Dhawan congratulated the PM once again. He tweeted that the country is eagerly looking forward under his excellence.

The country has decided congratulations hon prime minister @narendramodi sir on your victory. Looking forward to the future under you guidance and leadership where all Indians move ahead together #JAIHIND

Another Bollywood actor Arjun Kapoor came forward and tweeted that the country has already made its choice that is crystal clear.

We have voted, India has chosen and the result is almost crystal clear @narendramodi ji congratulations sir we hope the country heads upwards and onwards under your leadership…

It’s quite clear that BJP is going to form the next government under the leadership of Prime Minister Narendra Modi.

In the Lok Sabha elections 2019, a number of Bollywood celebrities managed to register their emphatic victories against their rival members.

Here, we would be a little precise to tell you that only those Bollywood personalities who fought elections with BJP’s ticket managed to register their respective victories in their constituencies.

However, those who fought election on the ticket from any other party except BJP had to suffer a clear defeat. It won’t be wrong here to say that the entire country wanted to see its next Prime Minister in the form of Narendra Modi.

Barkha Dutt who is the sister of Bollywood actor Sanjay Dutt lost her election after contesting from the Congress ticket.

In the same ways, some other Bollywood celebrities like Urmila Matondkar and Shatrughan Sinha also lost their respective elections simply because they didn’t contest Lok Sabha elections 2019 with BJP’s ticket.

The result of Lok Sabha elections 2019 clearly signifies that people of the country wanted to form a decisive government under the leadership of Narendra Modi. But many parties and their candidates failed to read the mood of people of India.

In fact, there are so many factors that came on to the surface signifying what a common citizen of this country wants.

As we have already covered that a number of Bollywood personalities who fought Lok Sabha 2019 elections registered their emphatic win after contesting under BJP’s ticket, there were others who simply lost their elections fighting with other party’s ticket.

In this section, we are going to update you with some of the Bollywood personalities who didn’t vote in the current Lok Sabha elections.

The first name is of Akshay Kumar who didn’t vote for 2019 election as he holds a Canadian passport. Although, Akshay was born in Amritsar, he was ineligible to cast his vote just because of the reason given above.

Just like Akshay Kumar, there are many more Bollywood celebrities who didn’t cast their vote due to one or more reasons.

Alia Bhatt is one of the most glamorous actresses who didn’t cast her vote in the general Lok Sabha elections 2019. Now, the reason why she was denied permission to cast her vote is simply because she holds a British passport.

Deepika Padukone is a versatile Bollywood actor who was born in Copenhagen, Denmark. The reason why she was denied to cast her vote is simply because she holds a Danish passport.

In spite of his short Bollywood stint, Imran Khan is quite active in the film industry.  Due to the fact that he holds an American passport, he was not eligible to cast his vote as well.

Just like many other Bollywood personalities, Katrina Kaif is also famous for her bold looks and fine acting skills. But she was also among the list of those who didn’t cast her vote in the Lok Sabha elections 2019.

Now, the reason why she was not eligible to cast her vote is simply because she is an English citizen and holds a UK passport.

As you see, all the above celebrities are simply not eligible to cast  their respective votes for the Lok Sabha elections 2019 as they were having the passports of another country.

As per the rules, if any citizen of the country is holding a passport of another country, he or she will not be eligible to cast the vote. In other words, only an Indian national is eligible to cast his/her vote.