Kartik Aaryan spotted to celebrate his birthday on a great note. While he can be seen celebrating his birthday along with several accolades for Bhool Bhulaiyaa 2, he is flying in colors on a successful note.

Kartik is celebrating his 32nd birthday in his own unique style that ookd no less than a studded affair.

The pictures clicked by them were later shared on their respective social media accounts.

Everybody looked excited to be a part of Kartik Aaryan’s birthday bash, especially when he hosted a white themed birthday celebration. His pictures with Manish Malhotra and Vaani Kapoor are taking rounds on social media.

Vaani Kapoor was the first who shared a picture with Ayushmann Khurrana and casting director Mukesh Chabbra. She later added a quirky caption saying, “Yeh shehzada ki birthday party main yeh action hero befikre ho Kar ghoom Raha hai.” On the other hand, Manish Malhotra tagged Kartik along with Ananya Panday and Vaani Kapoor saying, “With the handsome birthday boy and the gorgeous girls”. The star of the day, Kartik also reposted a photo with the team of his next Satyaprem Ki Katha, which also stars Kiara Advani, saying, ‘And it’s a schedule wrap’. 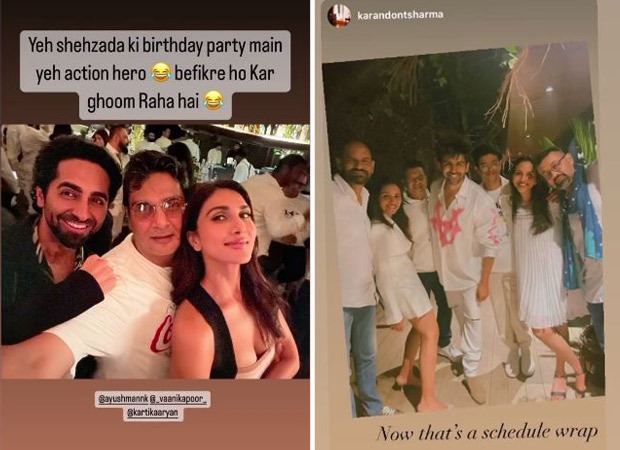 The actor celebrated his birthday where he posted a series of pictures from his cake cutting ceremony with his mother, sister, father and other family members.

This is what he stated, “In every birth I would like to be born as your koki?? Thank you for the sweet birthday surprise mummy- papa, Katori n Kiki” he said.

Along with the above, the actor gave an update for his upcoming film Shehzada. On the occasion, he released the first look teaser of the film.

Shehzada is basically a remake of Pooja Hegde and Allu Arjun starrer Vaikunthapurramuloo. The film will also star Kriti Sanon in the female lead.

Parineeti Chopra Joins Akshay Kumar for the Shooting of A Film...