Do you know your favorite TV show Bigg Boss 13 is all set to go live from September 29? Well, if you are still unaware of this, we would like to update you with that.

These days, makers of Bigg Boss are busy recreating some special moments to gain the popularity along with the attention of the masses.

In the past too, the makers had conducted a few special moments as well. But this time, they chose to shoot a few key portion of the show with none other than Madhuri Dixit who is going to tour the house with Salman Khan.

As per the newly released promo, the audience can well spot the actress wearing a yellow saree who decides to walk with Salman.

While walking with Salman, Madhuri tours every corner of the house including the kitchen and calls the place as the ‘political capital’ of the Bigg boss house. Well, this is the place which is often remains flooded with highly unusual fights between the contestants.

You can feel a real time difference watching Bigg Boss 13 as the makers have shifted the house to Film City location unlike the earlier seasons.

More than that, you can sense a contemporary feeling of Bigg Boss 13 house after looking the entire set up along with the way makers are trying engage the audience. The entire set up looks dashing in the presence of pink and purple colors. 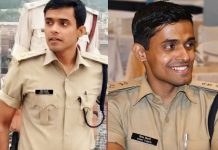